Exciting news coming from the Ribbon.

The Titan Group of Companies (Titan), has introduced one of the world’s largest Electric Luffing Tower cranes to Australia, establishing a new benchmark in crane performance, environmental responsiveness and operational safety.

Titan has erected the JASO J780 crane on Grocon’s The Ribbon Hotel site in Sydney’s Darling Harbour, where it works in unison with two other JASO J438 tower cranes.

Please read the article below as published in the Australian on 3 September 2018.

The latest addition to Sydney’s skyline is proof size does matter.

The $5 million Jaso J780 crane is considered one of the largest electric cranes in the world, and one of the few capable of doing the heavy lifting required at the site of Grocon’s $700m The Ribbon development at Darling Harbour.

Introduced by the Titan Group of Companies, the J780 was made in Spain with on-board technology developed by Australian and Spanish researchers.

Titan Group managing director Damon Hanlin said the huge crane would work alongside two others on The Ribbon project, which includes a 25-storey W Hotel, serviced apartments and a new home for the IMAX theatre.

Mr Hanlin said the crane, boasting a hoist speed of 310m per minute and with a 75-tonne maximum lift capacity, was a great asset to The Ribbon project.

“This project has some very ­detailed, heavy steel components, about 50 tonne each, and previously electric cranes haven’t been recognised as having the ­ability to do that sort of lifting,” he said.

“The J780’s capacity, performance, cloud-based data logging, safety capabilities and transportability is unlike anything the industry has seen before.”

He said the crane could be used around the clock because it operated silently, and it was much safer than traditional diesel cranes.

“They’re not flammable, so there’s zero chance of it catching on fire, and because there’s no oil the driver has a much safer environment to work in,” he said.

He expected the crane would be in much demand for other construction projects around the country.

“We’ve introduced many firsts to the Australian construction industry and this is another example.”

Titan’s other firsts include the introduction of an “anti-collision system” for sites that have several cranes working in close proximity, cloud-based data logging for interrogation and diagnostic fault-finding and correction. 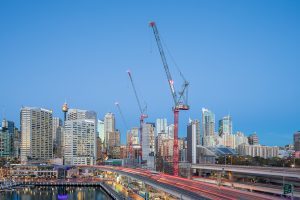